Hills, beech forests, pastures, farmhouses, ancient settlements, streams. The Regional Nature Park of Beigua is a wonder of nature, the largest regional protected area of Liguria situated astride the Apennine watershed, between the provinces of Genoa and Savona. Some of its landscape brings to mind, in due proportion, areas of the Rocky Mountains. If it were not for the fact that here we are in the Ligurian Apennines and, therefore, not far from the sea, that “dark sea that also moves at night and never remains still”, as sung by Paolo Conte. At one time, a sacred mountain for the Liguri, today it is known as the “Other Riviera”, due to its princely position – a verdant balcony from mountains overlooking the sea and merging nature, history, culture and ancient traditions.

Recognised since 2005 as an international Geopark and on the list of the European Geoparks Network, the Beigua Park is a place to explore well and slowly. On foot, by bicycle or by horse, following the numerous trails that link the towns and villages of the coast and the valleys with the mountain peaks, remaining a comfortable distance from the hustle and bustle of nearby civilisation. There are over 500 kilometres of trails criss-crossing the area, allowing visitors to admire the natural, historical and cultural beauties of the park, walking along mountainous crests just a stone’s throw from the Riviera. A beautiful panoramic itinerary at high altitude, easy to handle, begins from Prato Rotondo (1100 m.), near the summit of Mount Beigua, where you find the refuge of the same name and the park’s information point. From here, following the indications for the Alta Via dei Monti Liguri, the path arrives at a prominent rock outcrop where you can find one of the most spectacular views of the entire coastline, from Levante to Ponente. Continuing on a sloping though apparently flat ground along the Liguria-Piedmont watershed you reach the Miners’ House, a former refuge for those working at extracting iron, today a refuge for hikers, then going through the Faiallo Pass, you climb the Pozzo peak and, finally, arrive at the Argentea Refuge, which is on the summit of the Pian di Lerca summit, in one of the most spectacular stretches of the Alta Via. Restored by the Beigua Park Entity, the refuge was opened in 2014 and is presently managed by the CAI (Club Alpino Italiano) of Arenzano.

Those, instead, who would like to undertake something a bit more adventurous than a simple walk, have an embarrassment of choices. Overhanging rocky ridges and walls lend themselves to the sport of rock-climbing. Right next to the wind farm you can train on a specially equipped rock gym, on naturally “studded” walls or also test yourself with the extreme sport of bouldering, rock-climbing on rock masses without any type of equipment. Biking enthusiasts have six MTB trails available to them (only for the very fit) and two bicycle routes for road bikes. While for the lovers of rafting, they can launch themselves into canyoning in the torrents that rush through the narrow gorges.

The choice will also depend on the time of year. If in spring and summer, it is pleasurable to embark on Nordic Walking – there are six trails, of which it is worth mentioning the panoramic track through the Deiva Forest -, in winter, it is highly recommended to strap on snowshoes and set off on one of the five marked trails that cross the park. Instead, in autumn, when nature turns to preparing itself for winter, it is a must to wander through the beech forest’s foliage, when the green forests of the Beigua become a kaleidoscope of warm colours – different hues of brown, dark red, and yellow that seems to be orange. 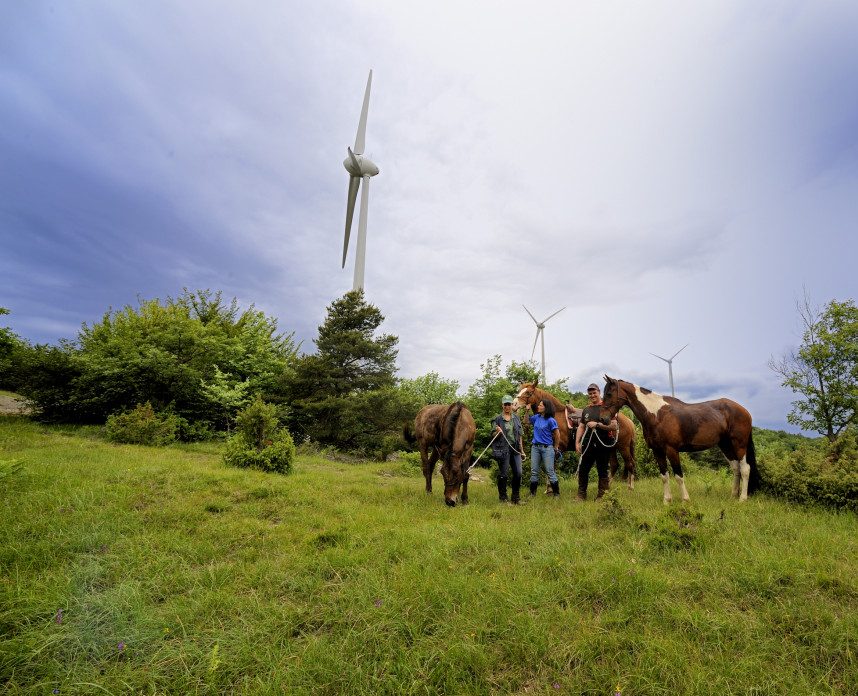 Descending from Mount Beigua, you can choose to make a pleasant stop at Sassello, already known in medieval times as a centre for iron-working, and today is one of the most economically active centres of the Savona hinterland. The first Italian municipality to obtain a bandiera arancione (orange flag) from the Touring Club, in Sassello, among other things, you can go porcini mushroom hunting or buy the historical amaretti (macaroons), the emblem of Sassello pastries. It was a certain Signora Getrude who, in 1860, invented for her own home consumption – she had a small tavern – the recipe of this soft pastry using local products, bitter almonds and apricot kernels.

After, given the unexpected success of this unique round-shaped sweet and its bitter aftertaste, the first local sales began, followed by a modest fame overseas due to the migrants who had been forced to move away for work but still remembered the sweet. Then, finally, in the early 1900s, the first international recognitions arrived from the International Expositions of Paris in 1911 and Madrid in 1914. Thus, after the war, many of these artisan workshops became modern factories, contributing to transforming Sassello into a thriving confectionary district. From Sassello, it’s worth making a last stop at Pontinvrea where, from 2008, the La Rocca wind farm has been in operation, taking its name from the Rocca della Ghingherina, a rocky peak on the Liguria-Padano watershed which is in the wind farm area.

Just outside Pontinvrea, there lives an international star of freestyle motorcycling, one of those crazy sports that involves the death loop at more than a height of 20 metres, releasing your hands from the handlebars with the same ease that a normal person would use when parking your car. His name is Vanni Oddera, and he was born and grew up in this area and now lives in an old farmhouse with ten hectares of surrounding land, fields and oak forests, a little paradise where he has built his own personal training park, with ramps, tracks and gangplanks for bikes. In this mountain hamlet of the Ligurian hinterland, where his family owns an historical inn, La Pineta, Vanni Oddera is known by all. For his acrobats with his KTM, for his way of being rather frank and a little eccentric, for his lifestyle, years touring the world – competitions, women and worldliness -, but also for having created for more than ten years Mototerapia, bringing joy and a glimmer of hope into the lives of many disabled children. In an agreement with Gaslini, the paediatric hospital of Genoa, in 2012, he set up the “Freestyle Hospital” project, introducing motorbikes into the paediatric-oncological wards.

A project which has become international. And in full lockdown, in 2020, he launched with a team of experts “Mototerapia Take-away”, a parallel initiative that led to bringing motorbikes directly to the homes of the children, with a tour that covered a large part of the Italian peninsula. “I wanted to overturn the idea that doing good is for losers. And the kids have a blind faith in me. When they see me in my bike suit they think I’m a super-hero”, recounts Vanni Oddera, who at 12 years old discovered he was afflicted by Kartagener’s Syndrome, a rare genetic disease that results in a mirror-image reversal of the internal organs. The doctors told him that he would have had to be careful even walking down stairs, but it didn’t exactly go that way. Notwithstanding 26 broken bones. And dizziness. “I keep my eyes fixed on the bike so as not to look down”, he says with conviction. A bit difficult to believe him.

Discover other Wind Farm in Liguria