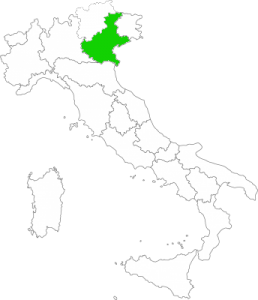 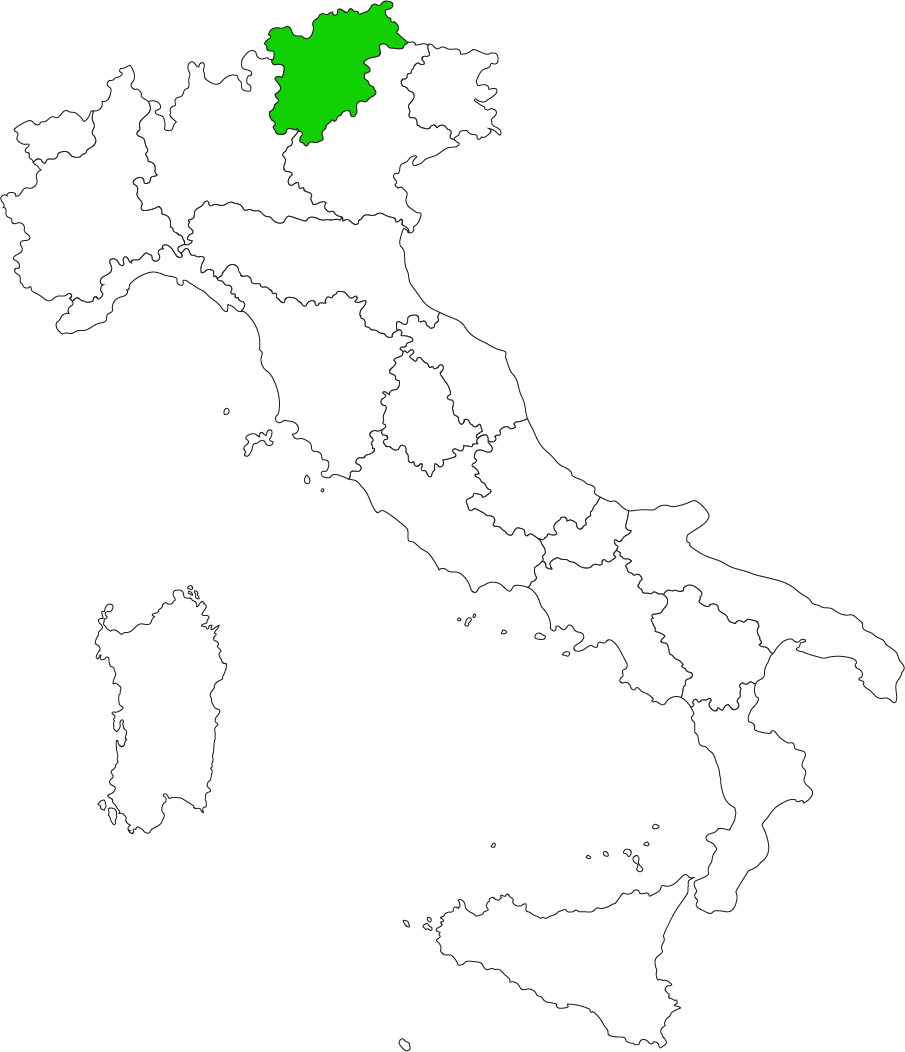 Vineyards and bicycle paths, flowering gardens and a Mediterranean climate. Lakes on one side and mountains on the other. Nestling in a fascinating morainic amphitheatre formed by the great glaciation that involved the Alps, Rivoli Veronese is in a special location, at the end of the Adige Valley, the gateway to the Po Valley plain and the Mediterranean basin. It is a geographic position that has marked the historical rhythm of this small village of little more than 2,000 inhabitants 25 kilometres from Verona.

Where the wind reigns. The night wind, that becomes stronger in the early hours of the morning due to the rise temperature, is called the Pelèr, finding a natural funnel along the Adige Valley. In the mornings of high pressure it can reach a wind speed of up to 14 metres per second. The same wind that, in addition to giving life to the wind farm, has made Lake Garda famous for many sailors and surfers.

Who knows if Napoleon Bonaparte was aware of this when, in January 1797, during his first Italian campaign, he launched a decisive attack against the Austrian army at Rivoli Veronese, resulting in the French conquest of northern Italy. A battle of such importance that it is remembered in Paris with the Rue de Rivoli, a central street of the Right Bank a stone’s throw from the Louvre. And in this village in Veneto, with a museum dedicated to the “small corporal”.

Overlooking the Adige Valley, a short trip from Lake Garda, surrounded by mountains, the Lessini Mountains on one side, mount Baldo on the other, the area around Rivoli is a paradise for hikers and sportspeople. As well, it is a traditional holiday destination for both Italians and foreigners. Lovers of wind-surfing have Lake Garda to practice their acrobatics, but remembering a simple but basic rule – in the morning there is the wind from the north, in the evening from the south. 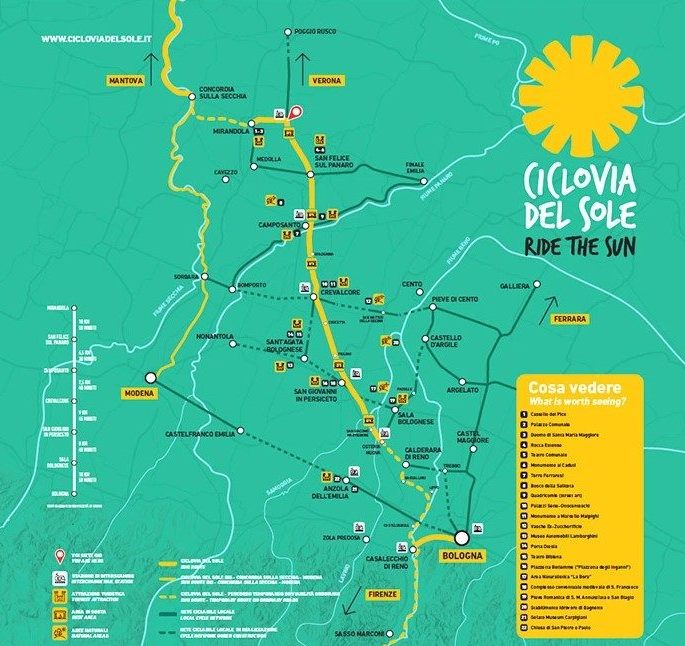 A paradise for hikers and sportsmen

While enthusiasts of trekking and nordic walking can find extensive trails that follow the crests of Mount Baldo (from the German wald, forest). A magic place already known in the 1500s as “Hortus Italiae”, the Garden of Italy, due to its biodiversity, it hosts 20 different habitats of Community Interest and more than 2000 plant species, and spectacular blooming flowers. For the less active, you can arrive at 1,760 metres by taking a modern cable car, and then lose yourself, admiring the marvellous panoramic views of Alto Garda.

However, in this area, the bicycle reigns supreme, thanks to a series of well-marked paths, mainly protected and suitable for all. As well, the Ciclovia del Sole – The Sun Route as it is called by foreign tourists – passes Rivoli. It is the most famous national cycle route, and a part of the EuroVelo 7, the European bicycle itinerary that links North Cape to Malta. Therefore, it is a must to climb on a bike and cycle the little more than 20 kilometers connecting Rivoli to the town of Verona. It is a pleasant cycle and walking path that runs along the Biffis Canal, passing old fortresses that recall the Austrian dominion and historical locks that, to a lesser degree, bring to mind that extraordinary hydraulic engineering work that can be seen in France along the Canal du Midi. However, there are many other interesting bicycle itineraries.

From Rivoli, for example, you can choose to easily cycle to Bardolino, on Lake Garda – famous for its chiaretto wine – and then continue along the lake front to finally reach Peschiera del Garda. The more energetic can then go on further, linking up with the Mincio track, destination Mantua, following one of the greenest and longest highways of Italy.

Going back to Rivoli, it is truly worth visiting Mount Mesa and the wind farm – there is a bicycle track especially built linking up with the existing Adige Valley cycle way. Here, the desire to generate clean and renewable energy using an inexhaustible source such as wind has admirably blended in with the need to safeguard this first-rate natural heritage and protect its biodiversity. Mount Mesa is a site of Community Interest due to the many wild orchids found growing in its arid meadows.

“We are in an extraordinary natural environment, where you can observe very rare floristic species and some endemics”, explains Raffaello Boni, President of the Legambiente Club of Baldo Garda, which, thanks to an agreement, manages the protection and safeguarding of the site. But not only.

In another agreement with AGSM, a didactic trail has been built here, with information boards and equipped rest areas, following the crest of Mount Mesa, as well as a program of guided visits for schools. In this “laboratory-territory”, as the geographer Eugenio Turri had renamed it, students have the opportunity to tackle topics of great geological, historical and naturalistic interest.

However, we do not live alone on sport and clean energy. And in this area there is no lack of temptation. One, almost obligatory, brings us to Valpolicella, the hilly area of Registered Designation of Origin (DOC-DOCG) reknown for its viticulture since Ancient Roman times. It is, therefore, almost a must to spend a day wandering about the vineyards and cellars, tasting Amarone, the most famous product of the area, a full-bodied but elegant wine matured in wooden vats for at least two years, or trying a glass of Recioto, one of the best Italian passiti wines. As well, it’s worth paying a visit to some of the splendid 16th century villas scattered along the hills.

Villas and Villages to visit

One not to miss out on is Villa della Torre, owned by the Allegrini wine producers, in the small village of Fumane, a jewel of Renaissance architecture constructed based on the inspiration of the country estates of Ancient Rome. Some historians have attributed it to being built by Giulio Romano, the architect of the Gonzaga family. There is a courtyard with a peristyle, a marvellous hall of mirrors, an exhibition of masks and a figurative and extravagant decoration on the four enormous fireplaces designed by Giovan Battista Scultori, a great friend of Giulio Romano.

Another visit should be to Villa Serego Alighieri, where we find the oldest wine cellar of the Valpolicella still in operation today. Wine has been produced here since at least 1353, when Pietro Alighieri, the son of a certain Dante (yes, the Dante), acquired land in Gargagnago di Valpolicella. The villa is not open to the public but the historical vineyard can be visited with wine-tastings.

In the area, there is also another place worthy of a stop, the tiny village of San Giorgio di Valpolicella, on the list of the most beautiful Italian villages and rising around the Pieve, one of the most important churches of the Verona Romanesque period. Situated on a small outcrop, on the clearest days you can enjoy an expansive view to the Tuscan-Emilian Apennines. Descending to the valley, it is highly recommended to make a stop at the Groto de Corgnan, the best restaurant in the area, managed by the New Zealander Judy Harman, settling here, being captured by the local smells and tastes. You cannot leave without trying the classic Amarone risotto or one of the other amazing dishes which are accompanied by the black truffles of the Lessini Mountains.