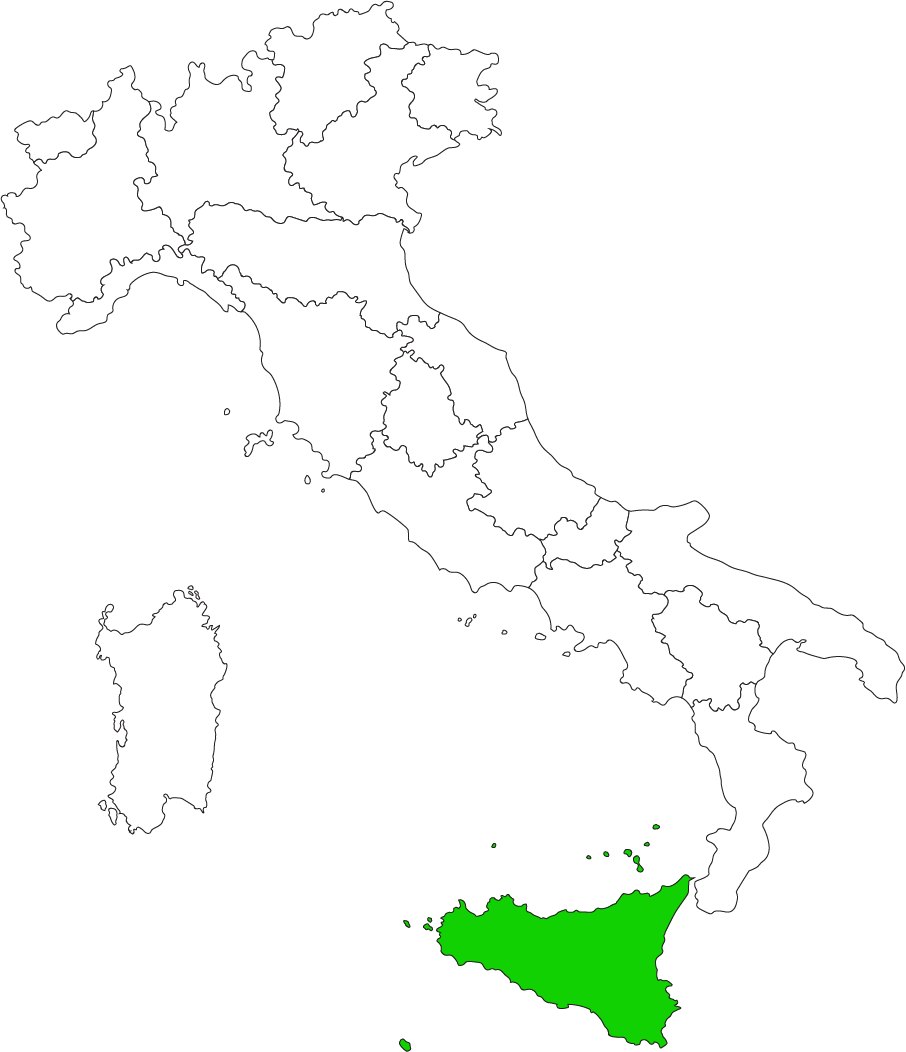 The Santa Ninfa wind farm can be found in a truly special area. For the conformation of its landscape and for the historical and artistic wonders surrounding it. Amongst these, standing out in importance is Burri’s Cretto, one of the most incredible landscape artworks in the world. A sort of cement shroud which covers the streets of the old town of Gibellina destroyed by the 1968 Belice earthquake, reconstructed on its original plan.

“There is a crack in everything, that’s how the light gets in”. The words of Leonard Cohen’s song (Anthem) come to mind as you visit it for the first time. It is not only a question of beauty, that is subjective, but of memory, solitude, hope. The “Grande Cretto”, as it has been renamed, is the symbol of that tragedy. In the eighties, many artists offered to create works free, responding to the appeal of the then visionary mayor, Ludovico Corrao, to revitalize the foundations of the new Gibellina with new architectural projects and works of contemporary art.

The Umbrian artist was also invited to participate, but once he had arrived he chose to carry out a project on the rubble of the old town. “We will compact the rubble as it is a problem for everyone, making it into a solid reinforced material” – he explained – “and with this cement, we will create an immense white fissure (cretto), so there will be an eternal memory of that event”. You cannot say that he didn’t succeed. The work, constructed between 1984 and 1989 remained unfinished and was finally completed only in 2015, on the hundred-year anniversary of Burri’s birth. The visit to the Cretto is worth the cost of the ticket to Sicily. 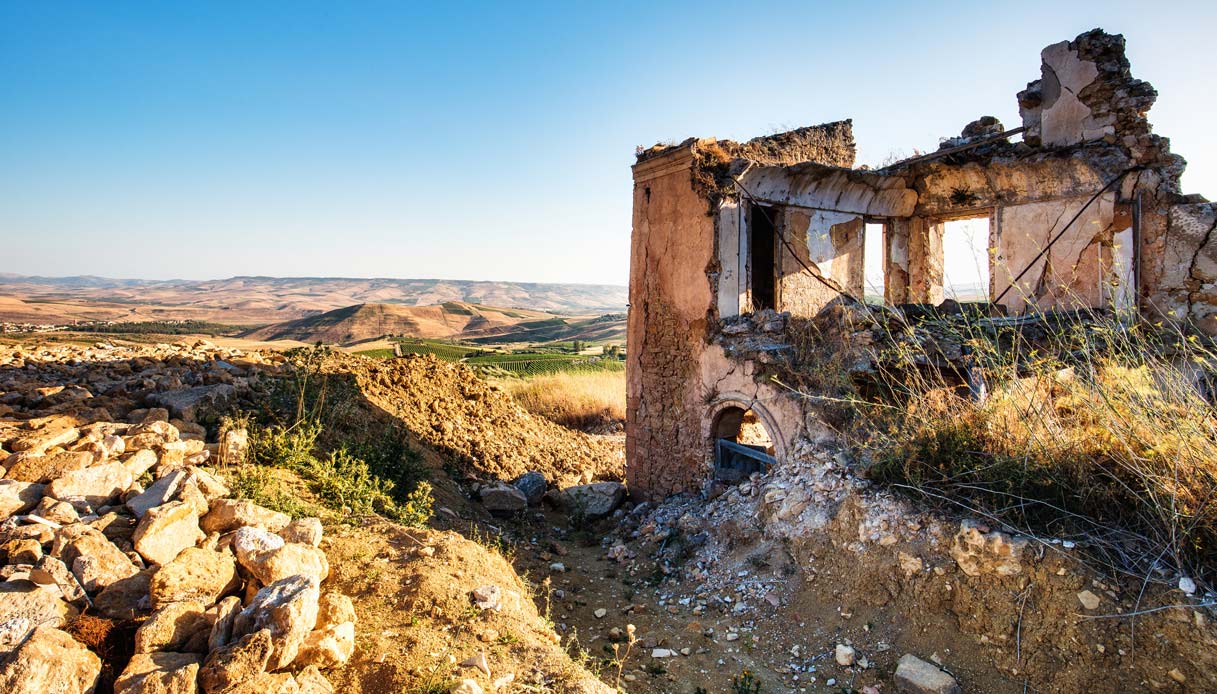 To have just a minimal idea of the damage caused by the earthquake, only a few kilometers from Burri’s Cretto, you come across the ruins of what was once the town of Poggioreale. As for Gibellina, it was decided to build a new town, a few kilometers further down the valley, but in this case, the small village buried under the rubble was left as it was, now overgrown with vegetation. The houses literally split apart by cracks.

The entrance to what remains of the main road is officially closed, for safety reasons, but it’s enough to go around a low gate to find yourself before a ghost town that shows the signs and memories of the past – the post office, the library, even the rusty old sign of a grocery store. Many objects and documents have now been recovered thanks to a recent project of the Poggioreale Antica Association. Ironically, this ghost town has become, over the years, a location for making films, also used as a set by Tornatore for his film, “L’uomo delle stelle”.

To have an overall picture and to close the circle, nothing remains but to head towards new Gibellina and verify first-hand the story of this unfinished miracle. Appreciated and criticized with the same vehemence. But absolutely to be seen, at least once, for its uniqueness. The symbol of Gibellina, the Stella di Pietro Consagra, was named by the same designer of the “Ingresso al Belice”, you will find on entering the town. A stainless steel gateway that recalls the festive illuminations of the villages of a time, and introduces the visitor to a route through the village dotted with more than 50 works of art, installations and sculptures, in what is probably the largest open-air museum in Europe. A visit to the Museum of Contemporary Art is also not to be missed, with its collection of about 2,000 artworks, including Mario Schifano’s great “Ciclo della natura”, as well as a series of interesting sketches and architectural models of the new Gibellina.

Amongst the municipalities literally razed to the ground by the earthquake, we can find Santa Ninfa. The famous castle of Rampinzeri, also cited by Tomasi di Lampedusa in his “Gattopardo” – “an enormous structure, only lived in one month of the year by farmworkers, mules and other farm animals” -, was damaged and then privately restored. In reality, to use the term castle is inaccurate. It is an old fortified courtyard of the 1600s founded by Don Luigi Arias Giardina, first baron and marquis of Santa Ninfa, and situated on the slopes of Mount Finestrelle, a historically strategic place due to its dominant position over the Belìce Valley.

It’s not by chance that here, in1937, King Vittorio Emanuele and the Head of the Government, Benito Mussolini, witnessed the final stages of the so-called “great military manoeuvres” of the Royal Army. Acquired in 2008 by the Municipality of Santa Ninfa, and in part restored with European funds for reconstructing protected rural areas, the castle, whose external walls in some places recall Andalusian facades, today houses a naturalistic and geological museum that tells the history of the area, an environmental educational centre, a documentation centre, as well as the headquarters of the “Grotta di Santa Ninfa” Nature Reserve, established in 1995 by the regional government and entrusted to Legambiente Sicilia. Therefore, a good starting point to visit this little known karst plateau, but of great geological, naturalistic and landscape interest.

The Grotta of Santa Ninfa

The reserve, established in 1995, came about to protect the Grotta di Santa Ninfa, a complex subterranean system of karst origin stretching for 1.4 kilometers – today, it is only accessible to speleologists for safety reasons, but also to safeguard the entire Biviere Valley, extending for 140 hectares and corresponding to the catchment basin of the cave. Didactic activities for schools are organized here, as well as scientific research and environmental education, and excursions or walks along the five signposted trails, to discover the sinkholes of karst origin and the necropolis of Mount Finestrelle. One of the more interesting tracks, a little less than four kilometers long, starts from the ethno-anthropological museum and follows the source of the Biviere river, crossing through very unique native vegetation.

Leaving the reserve, we advise, especially for those traveling with a family, to stop at the NaturAvventura Park, nine hectares of forest where three young environmental educators, Adriana, Roberta and Manuel, have set up an adventure park where even the youngest can launch themselves in total safety in a series of entertaining acrobatic courses immersed in an uncontaminated nature. Beginning from children of 3 years of age, thanks to the use of a “nest” net and a specific course of treehouses. The underlying idea of the project is to involve the youngsters in a series of educative games thus familiarising them with the forest, the tracks and the local area. 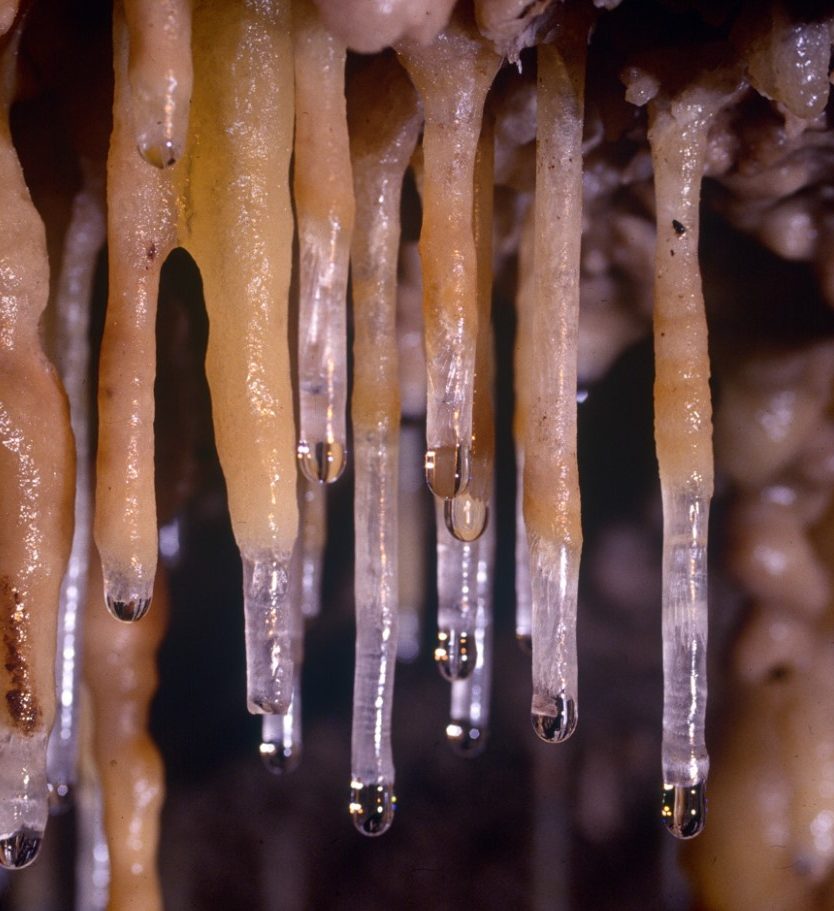 An area that you can, of course, discover also on two wheels. As all the enthusiasts know who, every year, enrol in the Granfondo MTB of Santa Ninfa, an amateur competition that follows a single stretch of the trails and dirt roads of the Sinapa Forest and Mount Finestrelle – named after the small engraved tombs excavated into its southern slopes, most of which were lost due to the collapse of the chalky walls – and arrives at the highest peaks of the RWE wind farm, situated between the areas of Gibellina, Santa Ninfa and Salaparuta. From here, you have a panorama that stretches across all of western Sicily.

Wandering along the crests of the mountain, don’t be surprised to come across grazing elegant Arab thoroughbreds. They belong to the riding club that is located in the Rampinzeri Castle. The owner, Vito, who also manages the highly appreciated restaurant in the castle – the crowning glory being boiled sheep’s meat – organizes easy excursions in the area, aperitifs on the mountain or, if you have a certain experience of horse-riding, also longer treks to admire Burri’s Cretto.

At this point, if time permits and you still feel inclined to go on, leave the Belìce Valley behind and head towards the sea, to the salt flats just outside of Marsala. Once you have arrived there, find a good viewing point to stop for a few minutes and contemplate the colors of the water that change with the setting of the sun, with perhaps a good glass of wine. They say that it is one of the most beautiful sunsets to be seen in the world. It’s worth the stop to see if it’s true.